Is “A2” rating of thyroid gland checkup result  a problem?

How worried should we be about the test result of thyroid gland test?

Results of thyroid gland inspection conducted in Fukushima are graded as A1, A2, B and C. A1 means “no cyst or nodule was observed” and A2 is “cyst that is  20.0mm or smaller, or nodules 5.0mm or smaller was found.” B and C ratings requires further

Inspection because the size of cyst or nodule is bigger.

When the result is either A1 or A2, you may be told “You don’t have to do anything until the next checkup.” This doesn’t mean “something might be expected to be found next time around so make sure to get the next checkup.”

In Fukushima, children are subject to periodical check up and in this context, “you don’t have to do anything” means “there’s nothing to worry about.”

A cyst is a sac-like pocket of tissue that typically contains fluid. It is usually benign and not cancerous. In children who are growing rapidly, it forms and sometimes resolve on its own. Hence, it is natural that test results which looks at finding a cyst or measuring the size can change as a child grow up.

When a cyst contains cells inside along with fluid, it is categorized as a nodule applying stricter standard in Fukushima.

Nodule, different from cyst filled with fluid, is a solid lesion which might develop into cancer even though it is small in size. So if it is bigger than 5.1mm, it’s graded as ”B” that requires secondary inspection.

In many B cases of cyst, no problem is found because the criteria for B (20.1mm or bigger for cyst or 5.1mm or bigger for nodule) only look at the size of the whole cyst filled including fluid, not the solid tissue inside it.

For a nodule smaller than 5.0mm, there’s no need to proceed to the secondary inspection and wait for the next checkup because the developing speed is quite slow and the size stays almost the same for several years.

In 2012, thyroid surveys were conducted in Hirosaki, Aomori Prefecture, Kofu, Yamanashi Prefecture and Nagasaki, Nagasaki Prefecture using the same instruments and procedures as in Fukushima. 4365 men and women took the test.

The result was the proportion of “A2” and “B” did not differ from that of Fukushima Prefecture. From this, it has been proven that cysts can be found independently of the radiation exposure by the Fukushima Daiichi nuclear power plant accident. 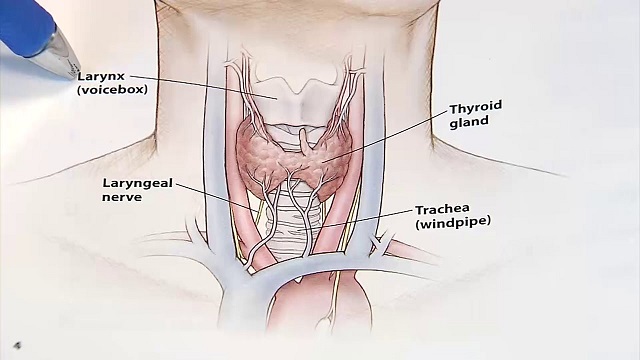