There are calls for the long-term storage of treated water containing tritium, which is technically difficult to remove, after purification of “contaminated water” generated at TEPCO’s Fukushima Daiichi Nuclear Power Plant (FDNPP). Is this feasible?

TEPCO has also presented the future outlook for the amount of treated water in the subcommittee. The amount of water to be treated will be reduced from the current 180 tons to about 150 tons, but the increase cannot be stopped and the tanks are expected to be full by the summer of 2022.

Is it possible to build more tanks than planned in order to prevent the tank from being full?

There is space available on the site of the FDNPP. But that space is needed to build the facilities that will be needed for decommissioning work. TEPCO has listed the facilities that need to be built and found a total of 12 types. For example, a temporary storage facility for spent fuel and fuel debris. Since the available space will be used for the construction of these facilities, there is no space for additional tanks. As a result, the expansion of tanks beyond the plan is considered to be very difficult.

If it is difficult to build more tanks on site than planned, is it possible to install tanks off site?

In order for tanks to be put off site, the consent of the local government and the landowners is required. There was a proposal to use the site of the interim storage facilities around the FDNPP. However, the Ministry of the Environment has taken a negative view of the interim storage facilities because they have a history of gaining the approval of landowners for temporary storage of decontaminated soil.

What about transferring the treated water off site?

Thus, the long-term storage of treated water is not easy. A sub-committee set up by the Ministry of Economy, Trade and Industry (METI) is planning to discuss long-term storage, but some committee members have said that permanent storage is impossible, and it is expected that specific disposal methods will have to be considered.

The towns of Okuma and Futaba are where the FDNPP is located. In Okuma town, there are tanks for treated water.

Mr. Izawa said, “I would like people to think about whether continuing to store the treated water is realistic solution for the problem. Those who oppose ocean release should come up with a counter plan for disposal. Postponing the problem is never a good solution. “

Mr. Yoshida said, “Disposing of the treated water is just the first step toward decommissioning the plant, which will take 30 to 40 years. I want people to understand that if we don’t move forward with the treated water issue, everything will be lost.

Regarding the impact of long-term storage on the town’s recovery, Mr. Izawa insisted that it would lead to a new rumor that the waste is being kept there because it is dangerous. Mr. Yoshida said, “In the event of another major earthquake, we are concerned about the damage caused by the tanks tipping over and flowing out. This will hinder the return of residents.”

They also strongly opposed a proposal to build a new tank to store contaminated soil in an interim storage facility that has been built across the two towns. The facilities were built on the assumption that contaminated soil will be stored for 30 years before it is shipped out of the prefecture, and Izawa said, “There will be no change of use. It’s a betrayal of the townspeople who provided us with the land for reconstruction,” said Mr. Yoshida. “It’s unacceptable to have tanks standing there.”

Mr. Yoshida said, “Water containing tritium is discharged from nuclear facilities around the world. It is important for people to understand what the difference is between the treated water from the FDNPP and the treated water and how it will or will not affect the fisheries.”

The government should already be aware of the issues involved in disposing of the treated water through discussions at the panel of experts. Mr. Izawa said, ” The government must take responsibility and be prepared to make a decision that will clear up the problem”. 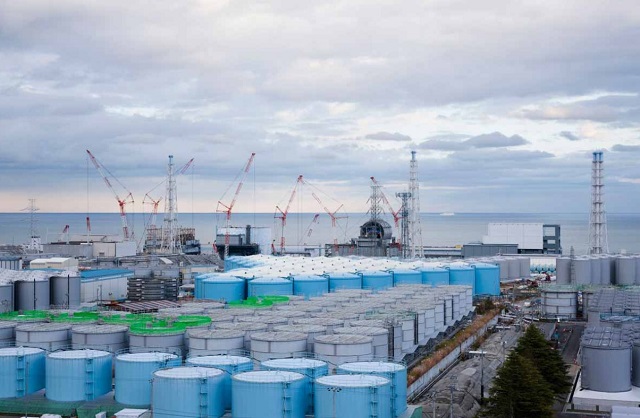