How can you measure the “mental health” of the residents around the Fukushima Daiichi Nuclear Power Plant?

Fukushima Medical University has been administering gThe Mental Health and Lifestyle Surveyh as part of gFukushima Health Management Surveyh to monitor the long-term health of the residents commissioned by Fukushima Prefecture.

As a result, they found that the mental health of people living around the nuclear power plant deteriorated significantly immediately after the TEPCO Fukushima Daiichi Nuclear Power Plant accident. It is improving gradually thereafter, however, not fully to the level of national average.

Right after the nuclear accident, evacuation orders were issued to the surrounding area of the nuclear power plant and people had to leave their homes and communities behind. The survey has been conducted periodically targeting residents in 13 municipalities which were designated as evacuation zones (Hirono, Naraha, Tomioka, Kawauchi, Okuma, Futaba, Namie, Katsurao, Iitate, Minamisoma, Tamura, Kawamata, part of Date) by Fukushima Medical University.

The survey deploys “K6,” a truncated form of Kessler Psychological Distress Scales internationally used to measure mental distress. The tool asks six questions such as “Did you feel desperate?” and quantifies the degree of distress of participants.

If the K6 score is or higher than 13 out of 24 points, it may indicate a mood disorder (depression) or anxiety disorder.

According to a research done in 2019 by Fukushima Medical University, proportion of residents who scored 13 or higher steadily decreased from 14.6% in 2012 to 5.7 %. Past research indicates that in normal times, percentage of those who score 13 or more is about 3%.

They also found that residents living outside Fukushima Prefecture had a higher proportion of psychological distress than those living within the prefecture (residents in Fukushima: 6.0%, residents outside: 9.0%). 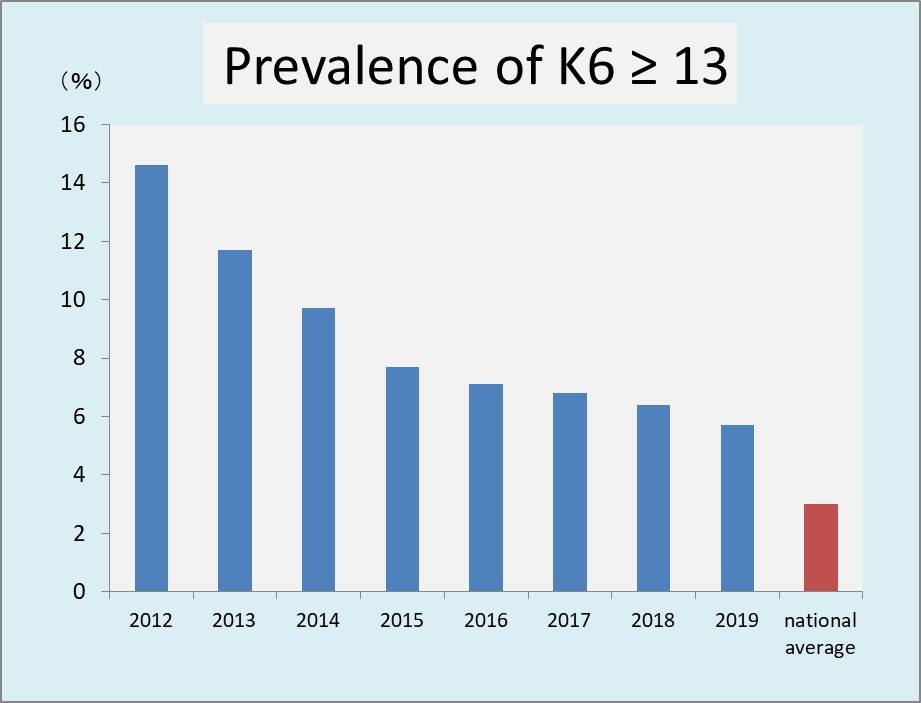