Relationship between the thyroid and iodine

The thyroid gland, or simply the thyroid, is a small organ (weighs about 20g)  located below the Adam’s apple in the front part of the neck. It takes in iodine from the blood to make thyroid hormones which regulates metabolism. The thyroid hormones increase basal metabolic rate and is especially important for children because the hormones stimulate protein synthesis and help bones grow.

Right after the accident of the Fukushima Daiichi nuclear power plant, “radioactive iodine” was scattered and some of it was taken into the human body through the air, water and food.

SInce its half-life is only 8 days, it is now impossible to calculate the amount of exposure from the radioactive iodine taken inside the body. First of all, the total amount released in the accident was about 1/7 of that of the Chernobyl nuclear power accident.

On March 17, 2011, a week after the accident, the government set a strict reference value of iodine as part of protective measures for food. It was 300 Bq/kg for milk and dairy products, and 100 Bq/kg for processed food using milk such as powdered milk. It was lowered further afterward and now it is 50 Bq/kg for both.

After the Chernobyl accident, the standard for raw milk was temporarily raised to 3700 Bq/kg in the surrounding region. Milk exceeding that level was processed to make powder milk and highly contaminated dairy products caused thyroid cancer among infants who ingested the products.

In EU, the concentration limit for radioactive cesium is currently 1000 Bq/kg (http://www.pref.fukushima.lg.jp/site/portal-english/en01-03.html).

It is not appropriate to only compare the numerical values. Still, it is fair to say the exposure of children in Fukushima is considered to have been kept relatively low.

Iodine is abundantly contained in seaweed such as wakame and kombu kelp, and fish that feed on them. Japanese have consumed a lot of seafood traditionally, so the iodine ingestion is relatively high compared to the other parts of the world. Close to the ocean, consumption of seafood in the areas where evacuation order was also high.

When iodine is sufficiently supplied to the thyroid gland, there is less chance that the radioactive iodine from the inhaled air is absorbed by the thyroid.

Reference intake of iodine to fill the thyroid gland is 140 microgram for those who need most such as adolescents between 12-18 years old and expecting women, according to “Dietary Reference Intakes for Japanese” published by Daiichi-Shuppan publication. 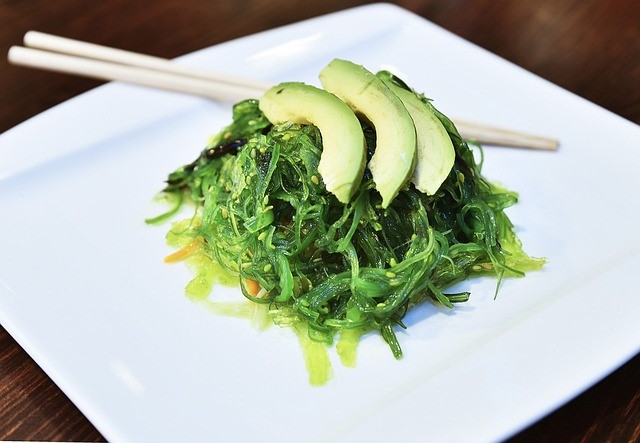