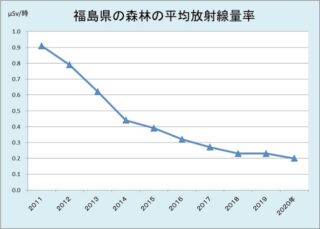 What is the radiation dose in the forests of Fukushima Prefecture?

So, Fukushima Prefecture has been measuring the radiation dose rate in the forests throughout the prefecture since the nuclear accident.

The average radiation dose in March 2020 was 0.20 microsieverts (Sv) per hour at the 362 sites that have been continuously surveyed. This is a decrease of about 78% compared to the level of August 2011.

Currently, the average radiation dose rate in Fukushima forests is so low that you don’t have to worry about the health effects of radiation from entering the forests of Fukushima.

The radiation levels in the forests vary from place to place. In order to know the average radiation dose rate of the site, Fukushima Prefecture has devised a method to determine the standard radietion dose rate.

First, select one tree at each survey site that represents it. Then, measure the dose rate at a total of 5 points around the tree (1 meter away from the tree and 4 points 7 meters north, south, east, and west from the standard tree). Then average those values is used as the averaged value represent the site.

This measurement method covers all forests except those in the difficult-to-return areas and restricted-living areas that were set after the nuclear accident. When the survey started in fiscal 2011, 362 locations were selected. The number of measuring sites has increased year by year, reaching 1,300 in FY2019.

The average radiation dose rates at 362 locations, which have been measured since 2011, have been declining almost every year.

As indicated above, the dose declined by about 78% by the year 2020. In addition, at 241 locations, radiation dose fell below the long-term target for decontamination (0.23 micro Sv per hour) set by the national government.

So far, the survey results by the prefecture indicate that the level in many places of forests in Fukushima is so low that there is no need to worry about radiation levels.

The forest of ​​Fukushima Prefecture occupies about 71% of the total land area, and forestry is an indispensable industry. In mountain areas, people enjoy strolling through the woods and picking mushrooms and wild plants. It is by no means a minor problem for those who dwell in the mountains that the radioactive materials scattered in the nuclear accident have disrupted the culture that continued for generations and forced them to change their lifestyle.

About the monitoring survey results in the forest in FY 2019 (Fukushima Prefecture site, Japanese) 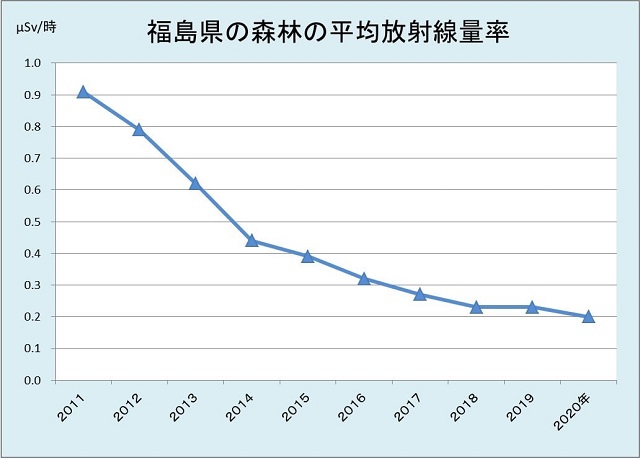